Home  »  Uncategorized   »   The Four Pillars Which Hold up the Cosmic Edifice * 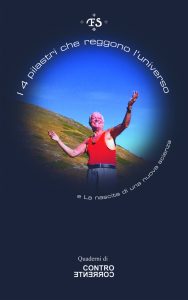 The four pillars which hold up the cosmic edifice are nothingness of nothingness, the proto-element, space and time.

Since we humans became a thinking species, we have sought to understand who created us, where we come from, who created the world, who lived in the sky, where we went after we died, etc. etc. In this respect, over the millennia of history, the human species has invented masses and masses of fairy tales, of stories, of mythologies about gods and other fanciful beings which I don’t want to list here. That is not the purpose of this article. Here I would like to propose to you the origins of the universe. The rest should be easy to understand.

The universe, as we know it today, is supported by four fundamental pillars, i.e., on nothingness of nothingness, on the proto-element, on space and on time.

These are the four pillars which form the fundament, the true base of the universe and they should be looked at in the following order:

Now let’s look at them one by one in a separate way a little more closely.

You can also see this on your screen. The proto-element is the lilliputian particle which generated the universe. It went more or less like this: From the nothingness of nothingness, at a certain point, a corpuscle appeared spontaneously, the proto-element, a phenomenon full of those basic bits necessary to create the universe.

“Space” is easy to understand, but not to see. It is invisible like nothingness of nothingness, in spite of being everywhere. On the screen, you see a white image, it could be black, grey, or any other colour, and this white image extends itself in every direction towards infinity: this is space.

Space comes immediately after the proto-element and is the third phenomenon to confirm the existence of the universe. Any object, large or small, in order to exist, needs space. No space: no object, no universe. Of course, and this should be clear, the nothingness of nothingness and space are only concepts, theoretical concepts and not physical phenomena. We cannot avoid them, and neither should we try, because they are irreplaceable and necessary to comprehend the foundations of the universe. This is the third pillar of the cosmic edifice.

So we come to “time”. Time, like space and the nothingness of nothingness, is invisible. In order to exist, time needs to have something to chew on: the proto-element, for example. Time devours everything which inhabits it, and it does so while its residents dwell in its invisible existence. The image you see on the screen, that of a child which grows from childhood to adolescence, to adulthood, to old age, and therefore approaches its own disappearance, this picture confirms how phenomena are devoured by time. Sure, these phenomena put up a certain resistance to time, resistance which is relative to the substance of the phenomena. This last one, the substance, decides the length, the duration of the phenomena lives.

I repeat: time is a concept as nothingness of nothingness and space, it is not a phenomenon. In other words, time belongs to the world of the abstract and not to that of physical objects. This is the fourth and last pillar of the cosmic edifice.

These four pillars are the real foundations of our cosmic edifice. The existence of the proto-element, as already mentioned, was spontaneous, by chance, contingent. It could also not have taken place. These four cosmic pillars, therefore, belong one to the other, as night and day. The lack of any one of them, mean the lack of all of them.

At this point, I would like to point out that to this level of cosmic reality is not arrived at by taking measurements, by experiment, looking under the microscope or looking through a telescope, neither by science as we know it. It is arrived at, if ever, firstly by love, by passion, by the will to know, by hard work and then by the science of philosophy, meditation, the sixth sense, reasoning, by deduction and induction, by common sense, by the science that Kant called, not synthetic knowledge, but analytical knowledge. Synthetic science has to do with facts, with experience, with empirical studies, with the senses. Analytical knowledge, on the other hand has to do with logic, with reasoning, with wisdom, with concepts which are necessary and absolute as are nothingness of nothingness, the proto-element, space and time. It is important to point out that synthetic knowledge can change over time, but this doesn’t happen with analytical knowledge at a cosmic level. This doesn’t change, it is eternal as are the four pillars supporting the universe.

Fundamentally, the universe is a metaphysical subject. When you go deeper, you discover that this is its reality, its authenticity. Of course, we could say that its existence is inexplicable, an enigma, absurd, absurd that exists and absurd even if it didn’t exist, unreasonable from the start to the end, beyond thought, an insoluble mystery. In short, the universe, is the UNNAMABLE and, therefore, a fortiori, also a metaphysical subject. We are, like it or not, metaphysical subjects, but we shouldn’t be scared by this. Quite the opposite. This reality should help us to live better our lives given that it is the true reality of our universe and of ourselves and anything which is true is also healthy in nature and in human terms.

So, these are the four pillars, solid, almost indestructible. I say “almost” because we know that sooner or later our universe will cease to exist. However, if there should ever be another universe after this one, there will also be the four pillars which we know and they will welcome the new universe. These are eternal and as such, they will form the four pillars of the future cosmic edifice ever and ever.

With regard to my work, there are no mysteries. I have been speaking about it for years. Firstly to my students at the Popular University in Biella, then in my trilogy and in other works I have published on my blog, such as, for example, “Einstein, a pillar of modern physics made of papier maché”, or in “My Singapore Chat”, and in “the Hereafter and the Thereafter of the Big Bang, or the True Beginnings of the Universe, etc.

I would like to close this article by repeating that I am not a scientist, but a free thinker. I neither vaunt nor accept blame; that is how things are. I only think that if I had been a scientist, maybe a physicist, a cosmologist, an astrophysicist, and if I taught at a renowned university or if I had worked in a scientific laboratory, my theory regarding the foundations of the universe would by now be known all throughout the world. But it is known only by my students and by those people who read my blog or who follow me on Twitter and Facebook.

Everybody ignores me. As if I didn’t exist or hadn’t said or written anything. I am ignored along with my work, my discoveries, ignored by academics and this because I am not part of the Establishment. Not being part of the Establishment is excuse enough to make you to be ignored, undervalued, silenced and put on one side as a useless object. Fortunately, however, this deplorable behaviour by the scientists has no influence on the laws of the physical world, and even less to the foundations of the cosmic edifice which are and will remain intact, and forever.

I would also like to say, with regard to this article, that I am perfectly aware that my discovery, the discovery of the four pillars, clashes head-on with the official religions which, as everybody knows, have to do with belief and not with science, but my work is science and science is the real soul of the universe.

*       Einstein, in 1905, sent his work to the Swiss magazine Annalen der Physik, I send mine to the readers of the Web. The difference between him and me is this: Einstein wrote for a very small elite of scientists who barely understood him; I write, thanks to the Web, for the people of the whole world. The content, between mine and his, I let the readers decide which is the most important.