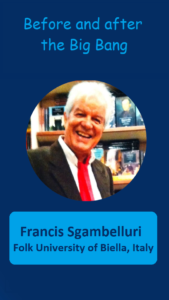 This is my thesis, the thesis supported by my 80 years dedicated to understanding man and the universe. For me, in fact, the universe in which we live, starting from its smallest particle that appeared by chance up to its largest galactic mass, is a unique and insurmountable irrationality. No god, no scientist, no philosopher, metaphysician, astronomer, man could never, despite of all his talents, science and creativity, never would be able to create a world more worse, hellish and meaningless than ours: a unique and insurmountable monstrosity.

Let us not be influenced by the fragrance of the roses, flowers, the beautiful landscapes, the first love, because these dazzles one day, if we wake up from the natural sleep, we then discover that they were nothing else than the prelude to a nightmare to come.

The Earth we live on, together with the solar system, are nothing more than a fabric of endless catastrophe. Plants, species, herbivores and carnivores, including homo sapiens sapiens, from birth to death know nothing more than a battle fought day by day and only to stay temporarily alive, just the time to discover that they are living in the worst of all possible worlds.

I am ready to sign, in order to support my thesis, a testament that if some genius manages to create a world worse than the one in which we live in, I will give him everything I have and then disappear forever from the Earth.

My idealism: we could live in the best of all possible worlds

On the other hand, I also argue that if we wanted to, we human beings, we could bring out the most interesting and positive part of our brain and so doing build the best of all possible worlds. I firmly believe in a life worth living from all human points of view and this life can only be built by us despite all the negativities we have just talked about above. It takes only rules, human rules, rules of common sense, of good coexistence, truly heartfelt and altruistic rules devised with great love, with true humanity, democratic clarity and an objective, scientific and human galactic knowledge. We could thus transform the physical and social hell in which we live now into an earthly paradise, a real earthly paradise. This is the word of a simple mortal, that is the word of Francis Sgambelluri and if he says it, you can belief that it is so!