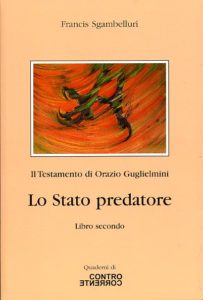 The State: what a great plundering system

Justice being taken away, then, what are kingdoms but great robberies? For what are robberies themselves, but little kingdoms? The band itself is made up of men; it is ruled by the authority of a prince, it is knit together by the pact of the confederacy; the booty is divided by the law agreed on. If, by the admittance of abandoned men, this evil increases to such a degree that it holds places, fixes abodes, takes possession of cities, and subdues peoples, it assumes the more plainly the name of a kingdom, because the reality is now manifestly conferred on it, not by the removal of covetousness, but by the addition of impunity.

What were the first four famous monarchies if not kingdoms full of outlaws, nations made up of adventurers, pirates and thieves where only brute force defended their banditry.

As far as evolution is concerned, the problem of social injustice is strictly linked to the crisis of the State intended as a predatory form of political organization which uses the sword since the day it was born. If this is true, mankind will probably not survive until the next hundred years, or not even fifty years, if man will not be able to overcome the insatiable will of sovereignty and hegemony distinctive of the State.

If only one person, one single person on the whole Planet will be unjustly mistreated, every institution in it, is not worth existing!