Einstein published, in 1905, his famous articles in the scientific journal “Annalen der Physik” where only a few scientists and with difficulties could understand something; I publish my articles on the Web, on Facebook, on Twitter and anyone, given their scientific simplicity and reality, can read and understand them in the whole world.

The only tolerable immortality is the virtual one and he who knows the universe  will conquest it. That’s what I propose in this post to the readers of the Web. 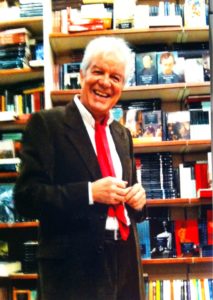 In these 12 images of the universe, starting with homo sapiens sapiens and ending with the immortal virtuality, each of us should be able to understand his own casualty and the meaning of his life in this  world of ours. I would like to start by saying that quantum mechanics and general relativity * represent the micro and the macro. In other words, the former belongs to the micro-world, the latter to the macro-world; the first appeared from nothingness of nothingness, the second emerged from the phenomena (i. e. the force of attraction is relative to the magnitude of each phenomenon in question); the first imposes a metaphysical question, the second a physical one; the first has to do with chance, the second with the end: big crunch or big chill; the second without the first wouldn’t exist, the first without nothingness of nothingness either. All this is logical as 2 + 2 = 4, and this helps us nearly to touch with our own hands the origins of the universe, but it doesn’t help us to make sense of our lives, this no or maybe yes? We’ll see.

Let’s start with the first image. Personally, of all the species on this planet, the one that most terrifies and amazes me, is the homo sapiens sapiens.

The second. The Earth is a full-bodied mass of phenomena destined to a growing disorder and will conclude its life time with the destruction and disappearance of itself and of all the other phenomena that live in it.

The third. The other seven big balls that revolve around the boss that captured them, the Sun, are a monstrous spectacle of cosmic routine: all doomed for billions of years to make always the same rounds and spins around their master who, despite all the light it emits, is blind!

The fourth. If we looked a little further into space, we would see the Milky Way, a stellar mass with a black hole in its center. The whole of this galaxy is doomed to be swallowed up within a few million years by another galaxy even more gigantic than the Milky Way, the Andromeda.

The fifth. Continuing to travel deeper and deeper into space, we encounter objects of all kinds and sizes, but above all we’ll meet the soul and heart of the Great Whole which is composed of a mass of stars and planets that all drift away from each other in an infinite void.

The sixth. Animated species and inanimated phenomena, in this titanic cosmic confusion, are orphaned of mothers and fathers and abandoned to their blind and sad fate.

The seventh. Speaking of conscience, of judgment, of values, of long-distance goals in this so made universe, is the height of nonsense. The most suitable rule, in this inhuman chaos, is to live day to day.

The eighth. As for the whole of this insult to reason, the universe will also have its days numbered and will, sooner or later, disappear in the endless space that contains and imprisons it.

The ninth. Will it be reborn? No one will ever know for sure whether or not this event will happen.

The eleventh. The meaning, therefore. The meaning, dear reader, is in us, we are it. We are the meaning and no one else can give it to us from outside of ourselves: we are meaning in this meaningless world.

The twelfth. Whether reborn or not reborn our universe, this, the one in which we live know, is also the universe of tomorrow and after tomorrow and forever: always the same, more or less. In this immortal sameness lies our virtual immortality: we live forever only in a knowledgeable way.

The first is that I have nothing against the labourers of science, that is the scientists, those who don’t go beyond the microscope and the telescope, but if any of them have something to say about my article, say it, or if they have a more correct and realistic theory of the universe than mine, demonstrate it, please. That’s fine with me, I would be very happy, indeed. All my life, since I began to understand what it was about to exist, I have tried to fight as much as possible against all the stupidities and absurdities in which we are immersed in our society, and I feel that I will have to continue doing so as long as I live, because life is beautiful if lived well and in serenity.

The second. This description of the universe, which goes from its birth to its death, is a gift that I love to make to my friends of the Web all over the world, wishing that this vision of the Whole universe, sincere and realistic, will help us to live better, more sincerely and friendly with one another and with the universe. And I finish by saying that for me every human being born on this planet, is a god who is born and a god who dies.

* Einstein argued, in his theory of relativity, that space and time change their form in the vicinity of very massive bodies, such as black holes, stars, planets, etc. But, as I wrote in many posts published on my blog and on Facebook and Twitter and in particular on the article “Einstein, a papier mache pillar of modern physics” and on my book “The 4 pillars that support the universe and the birth of a new science”, time and space don’t exist at all, they are only mental concepts, they exist only in Einstein’s imagination, but not in reality.

Well, what else? Only that. If you found the article interesting, spread the word, send it to whoever you want, even to magazines and newspapers, obviously leaving my name and my copyright, thank you!